If you’re looking to own a high performing metal detector without spending a fortune, then the Garrett ACE 400 is a great option to consider.

The ACE 400 is a quality-built detector that comes top in the popular ACE series. It might be considered as the elder brother of the ACE 150 and ACE 250, but I personally see it as an upgrade to the ACE 350, which is no longer in production.

In this Garrett ACE 400 review, I will try my best to expound on what you need to know about the 400 to help you decide if it’s actually worth your time and money. If you had used the 350 before and was satisfied, then I have no doubt you will be impressed with the 400.

Although the machine has a lot of things in common with the previous models, it comes with a few more features that make it a lot more valuable. Some of these include a digital target ID, cams lock, Iron Audio, and adjustable frequency. Key Features of the ACE 400

Now let’s explore the most important features of the machine so you will know what to expect.

One major feature that was lacking in the ACE 350 and the older members in the series was a digital target ID. Instead, the detector employed a segment identification process that tells you what it thinks the target metal would be – copper, gold, iron, or some other metal.

While this approach was OK, it seemed too broad in the way it identified metals. It wasn't exactly clear what the numbers meant, and even the included visual ID function only gave an idea of what the target metal was.

In other words, this system wasn't nearly as accurate as the numerical system. So, the switch to a digital target ID came as a huge relief.

This ID system is based on a 0-99 numerical scale, which tends to represent the target more accurately.

Before the ACE 400, the older detectors in the ACE series featured a ground balance that had only one factory pre-set setting. In other words, users couldn’t adjust the ground balance and thus had to work with the single setting provided.

This is quite different from what you get with many higher priced models where the adjustment of ground balance is made both manually and automatically.

However, in the case of the ACE 400, ground balance is completely lacking. But this doesn’t affect the performance of the machine in most environments. Getting the hang of it will require some practice, so life is a little easier without it. 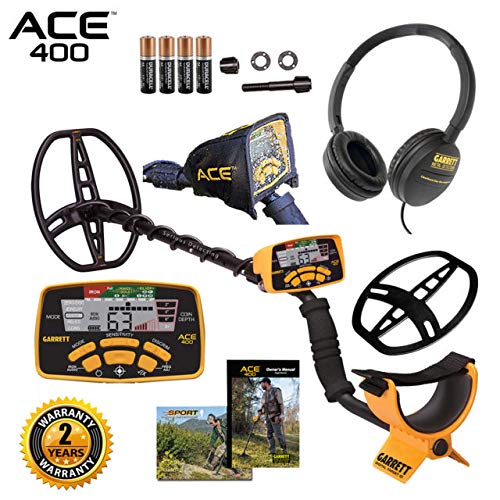 The main situation where the need for ground balancing really arises is when hunting on mineral-rich soils such as wet beach sand, gold areas, or any other place with a huge amount of mineralization. In such areas, the ACE 400 will likely perform less than expected.

For me, this is not a big deal. In fact, considering the price of the machine, ground balance adjustment is not something anyone would normally expect. But I still thought it is necessary to bring it up so you will be aware.

The Iron Audio feature is definitely a great addition. I doubt you will find anything out there that beats this!

This feature alerts you with a grumbling sound whenever there’s iron in the target object.

So what makes iron audio a big deal?

First of all, a lot of users have complained about the lack of this feature in the old ACE series. So, to finally get it in the ACE 400 without a significant change in price is quite awesome and definitely worth acknowledging.

Secondly, iron audio is a great feature to have for an entry-level metal detector. And this is because it is very easy to be deceived by trash targets. The last thing you want is to dig up a target you thought was coin only to discover it’s just a bottle cap.

However, with a feature like iron audio, you can double-check your targets by flipping it on before you dig. If you get back a grunting tone, then it means you've found something valuable, or else it's just another piece of trash.

It is important to note that you will need iron discrimination for the iron audio function to work. Thus, setting the machine to zero-disc mode will not give you access to the feature.

Another wonderful feature that makes the ACE 400 stand out from competitors is its adjustable frequency function. Although the machine might be considered a single frequency model, it still allows users to tweak its 10 kHz frequency slightly whenever the need arises.

This is a really cool feature to have, especially when you're hunting with a group, and you have someone close whose detector is operating at the same frequency. In such a situation, tweaking your frequency a bit helps to prevent interference. Or else you will end up detecting someone else's machine or get detected.

Now, this also applies when hunting near power lines operating with the same frequency.

(Check out our ultimate buyer's guide of metal detector and comparison.)

In terms of the search modes, the ACE 400 takes after the ACE 350. Like the old model, this one has 5 search modes. This includes search mode for coins, jewelry, relics, custom, and zero discrimination.

Each of these modes is useful for various search situations. However, if you are a beginner, you will be using the default discrimination mode.

More experienced users might decide to customize their own search modes using the custom option.

The other modes are perfect for hunting specific targets. 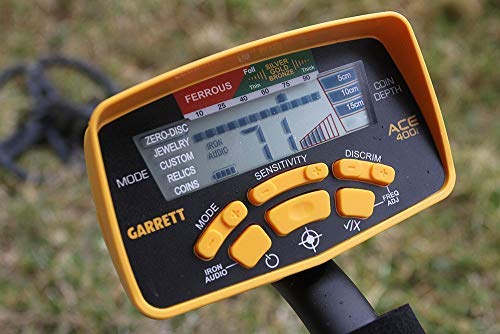 The Garrett ACE also comes with cam locks that are designed to enhance the stability and strength of the machine.  This helps to prevent wobbling as you swing the device.

The control panel of the ACE 400 is almost like any other one you will find in the ACE series. So, with any experience of the other models, you should quickly feel comfortable.

Although the display is also identical, a few adjustments were made to enhance its user-friendliness. All the items on the screen are clearly displayed and are all easy to interact with. You don’t need to cram a chain of commands to access any feature as all the buttons on the machine are labeled.

The only issue you might have with the control panel is that the legend doesn't always come up clear and can be difficult to read in broad daylight.

Personally, I don't consider this a big deal since it is rarely used. What you should be more concerned about is the target ID, which fortunately happens to be visible all the time.

Like most people, what I like about this metal detector is that it’s very affordable. In fact, I’m guessing price was a major motivator for choosing the machine.

At the moment, I personally think it's a perfect choice for a mid-level detector, but beginners who can afford to pay a bit extra can also purchase the machine. Believe me, you will get incredible value for your money. 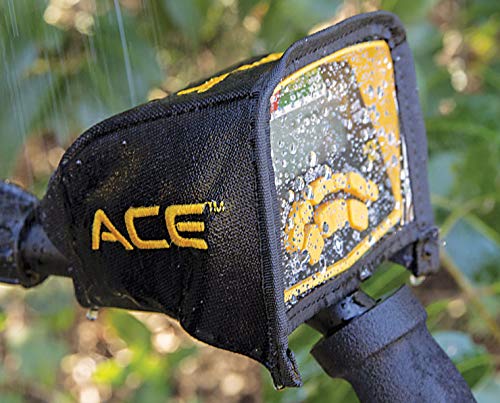 Comparison with Other Models

It's quite obvious I'm a big fan of the Garrett 400. And I consider it to be one of the best options available for beginners and also for intermediate users. You may also hear about other detectors like the AT Pro, the Fisher F44, and even the ACE 400i. Let's see how the ACE 400 compares with these models.

As I mentioned early in the article, the ACE 400 is the top model in the ACE family. If you want to go higher, then the next Garrett collection you should consider is the AT series. This is where you will find the AT Pro. As expected, the AT Pro brings more to the table than the ACE 400.

For instance, it has a HIGHER broadcasting frequency and can cover more depth. Also, the AT Pro is designed to penetrate deeper into the ground. It can cover up to 10 feet of depth when submerged. In addition, the AT Pro performs better on soils with very high mineralization. This is because it has ground balance adjustments.

For all these features, the AT Pro comes at a higher price, which makes it out of range for budget buyers. That said, even though the ACE 400 lacks some of the advanced features, it's still an excellent choice for its price.

Fisher F44 happens to be in the same price range as the ACE 400. So which model is better?

First, I would like to let you know upfront that both models are great, and you won’t regret choosing any one of them. Top features like iron audio, notch discrimination, and numerical target ID are well represented in both detectors.

The major difference between both machines is that the F44 has a manual ground balance, which makes it more suitable for exploring areas with a huge amount of mineralization. However, the ACE 400 offers greater sensitivity for smaller targets due to its higher broadcasting frequency. You can also check f75 which is affordable option in the market.

You might hear people on forums asking about the difference between the ACE 400 and the ACE 400i. So, how do both models compare, or what are their differences?

Just so you know, the “i" in the 400i simply means "international." In other words, the 400i is the international version of the normal ACE 400.

Thus, there’s basically no real difference between both models apart from the fact that there’s more iron discrimination in the international version.

Also, the 400i has no target segment for U.S coins, which is understandable since it's specifically designed for hunting outside the US. So, choosing between both detectors is a matter of location. If you're in the U.S, then you should go for the normal ACE 400, or else the 400i is the ideal option.

So, is the ACE 400 a detector you might consider for serious treasure hunting OR is it just another kid on the block? I guess you can now answer that.

It is obvious the machine is one of the best detectors around and definitely one that will give you a good bang for your money.

Some of its features, like notch discrimination and iron audio, are things you would normally find in higher-end models. But still, you get all these for a very affordable price. What more can you ask for?

I hope my Garrett ACE 400 review has opened your eyes to what you can accomplish with the machine. Let me know if you have any more questions. Until then, enjoy your hunting!

Ryan Ward has been a metal detector enthusiast for 5 years, and in that time he has written huge resources on the topic of metal detector.